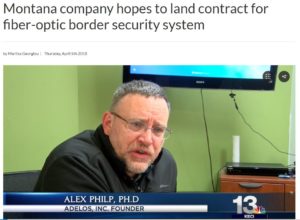 The debate over building a wall along the U.S.-Mexico border rages on. But one Montana company is working to land a government contract to build a different type of security measure on the border.

A Polson-based company says it has a system that uses buried fiber-optic lines to detect movement from the air and ground, which they say is more cost-effective than a wall. And they say it wouldn’t have as much impact on the landscape or the environment.

“We need to know where the people are crossing and who they are so we can take action,” Department of Homeland Security Secretary Kirestjen Nielsen told reporters Thursday.

Though the southern border is more than 1,300 miles away from Montana, one local company wants in on the action.

“I track it every single hour of every single day,” Adelos, Inc. founder Dr. Alex Philp told us about the battle over border security.

Philp first saw a trend toward sensor technology while doing research for NASA at the University of Montana. He founded Adelos, Inc. in 2006 after the U.S. Navy contacted him to help implement state-of-the-art fiber technology. It turned into a sophisticated system that uses lasers and fiber-optic cables the size of a strand of hair. They can detect even the smallest vibrations in the earth’s surface. That means it can detect vehicles, footsteps, low-flying aircraft and more. This type of linear ground detection system is now being considered for border security, and Adelos wants to win the bid.

“It would mean job growth, it would mean hiring UM and MSU grads,” Philp said. “We have the ideal workforce for what we’re going to be facing and what we’re going to be scaling. We want a chance to allow our system to compete, go in, show what we can do on the southern border, bring value to the U.S. taxpayer and ultimately deliver value to our investors and those who believed in us all along.”

“It just so happens with the intensity and policy decisions of this current administration that there’s a ton of money and a lot of opportunity,” Philp said. “We’ve been at this a long time. It’s a classic story of small business fighting the battle, a technically very rigorous company working very hard. The investment from S&K Technologies kept us going and allowed us to stay in the game.”

The fiber-optics system scans 12,000 times per second and can talk to other machines like drones to identify movement. That means if there are footsteps somewhere, it can send a drone or use a government camera to go to a specific location for images. It can detect location down to a meter.

Right now the company has a government contract with the U.S. Air Force.

“When most people think of advanced technology and advanced sensor systems that are world class, they’re not necessarily thinking Montana, although that’s changing,” Philp said.

Philp knows he faces competition from some companies in England, Israel and possibly China.

“We are one of the few U.S.-based and, in this case, Native American-owned companies in this fight,” he said. “We believe we’re the only Native American company. It doesn’t get any more American than that.”

No matter where you stand on the border security issue, Philp says this kind of sensor technology is the future for multiple kinds of security. If they get the contract it will mean many more jobs for Montanans and other Americans. If they get the bid they’re hoping work will start by fall.